A Member of Stuart Group Ltd.

Ejectors pumping utilises the "venturi effect" in water as the pumping mechanism.
The eductor is based on the principle of using a small volume of water at a high pressure to drive the flow.

The ejector system is generally used in areas where the soils have a low permeability. It is especially well suited for deep excavations with stratified soils. The ejectors are installed at relatively close spacing similar to the array in wellpoint systems, but require only a single stage to effect draw downs of up to 30 metre. 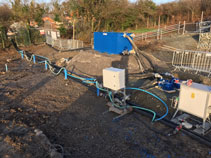 In a typical ejector system, a series of ejector wells are installed and connected to two parallel headers. One header is a high -pressure supply line and the other header is low pressure return line. Both lines run to a central pump station which feeds water under pressure to eductors placed at the bottom of the wells.

The system uses a venturi to draw groundwater into the well screen and up to the surface. In the single pipe packer system the large diameter pipe forms the well casing and a smaller inner pipe forms the return line. Water is pumped under high pressure along the annulus between the two pipes and is forced through the nozzle and venturi. The groundwater is then recovered through the well and into the return pipe, resulting in a stabilizing effect in fine-grained soils.

Especially suited for deep excavations and stratified soils. As many as 100 ejector wells are commonly activated by a single pumping station although this varies considerably on the volumes of water to be pumped and the lift required. The volumes of water which can be pumped by each system are generally low, typically less than 5 m³ per hour. 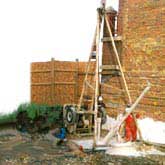